Prizewinners of some of the most prestigious competitions & awards in the world (Banff, Cleveland Quartet Award, etc.), the Rolston Quartet will treat you to an incredible evening of chamber music that will include:

You’ve never been to a concert in a venue like this one. Picture relaxing couches, a smaller audience, and romantic lighting.

Chamber music in its finest form: the string quartet. Artists from all over the country (and even Canada) are flying in to play the greatest works of the repertoire.

Bring your favorite bottle of wine or other drink of choice and enjoy it during the concert. Door fee applies.

Add on the appetizer bar option and feast on a beautiful charcuterie bar to pair well with your bottle of wine or other beverage. 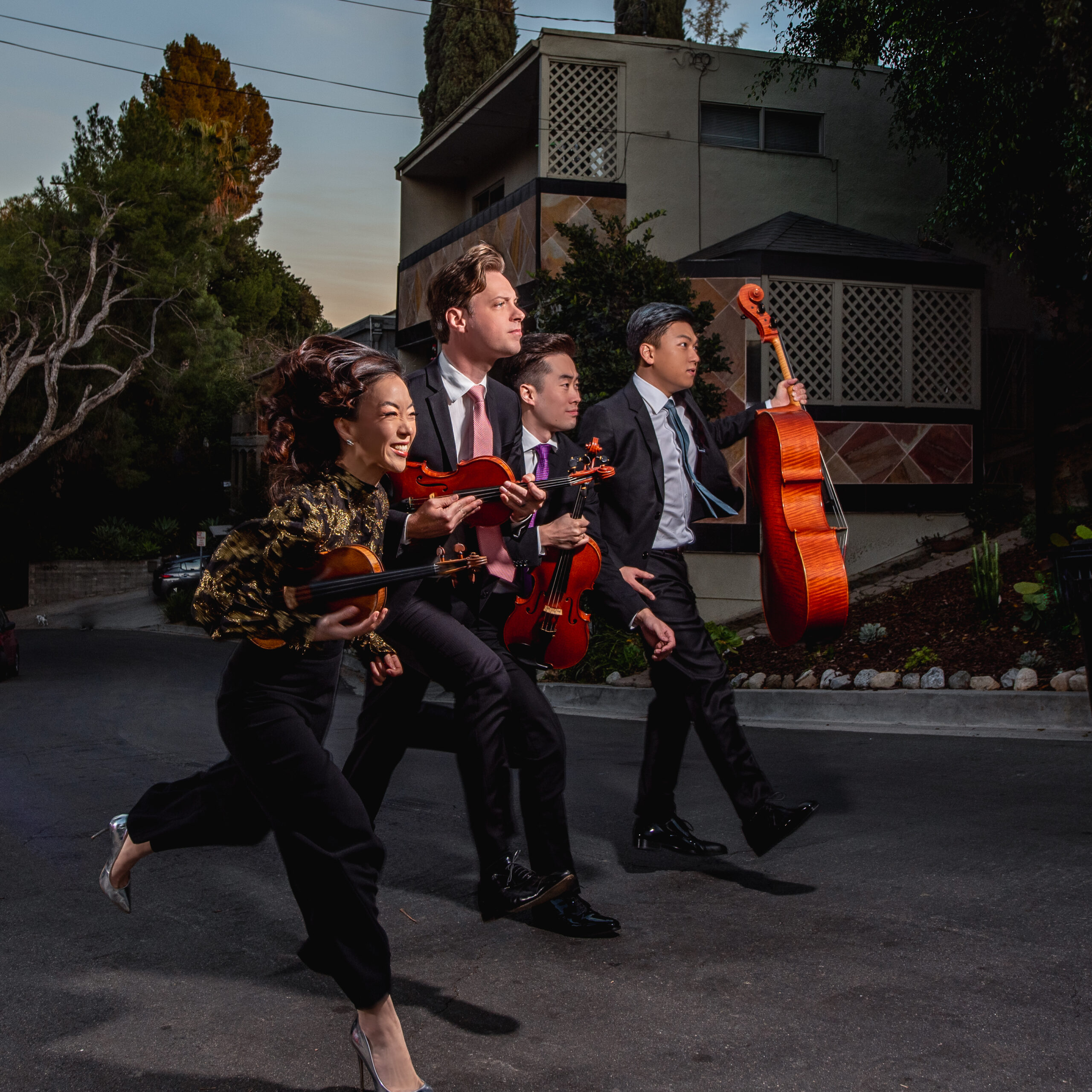 Notable collaborations include performances with renowned artists Janina Fialkowska, Gary Hoffman, Nobuko Imai, Miguel da Silva, and David Shifrin, as well as the St. Lawrence, and Dover Quartets. The quartet are associated artists at the Queen Elizabeth Music Chapel, and completed a two-year term as the Yale School of Music’s fellowship quartet-in-residence in spring 2019. Previously, they were the graduate quartet-in-residence at Rice University’s Shepherd School of Music. Keeping in the teaching tradition, they have taught at the Yale School of Music, University of Toronto, and the Bowdoin International Music Festival among others. Primary mentors include the Brentano Quartet, James Dunham, Norman Fischer, and Kenneth Goldsmith, and the quartet has received additional guidance from the St. Lawrence String Quartet, Miguel da Silva, and Alastair Tait.

The Rolston String Quartet was formed in the summer of 2013 at the Banff Centre for Arts and Creativity’s Chamber Music Residency. They take their name from Canadian violinist Thomas Rolston, founder and long-time director of the Music and Sound Programs at the Banff Centre. The original members are all graduates of The Glenn Gould School (GGS), and it was at the GGS that they founded their passion for chamber music and, under the guidance of Barry Shiffman, focused their artistic growth and ensemble playing. In addition, Ms. Lee, was an alumna of The Rebanks Family Fellowship and International Performance Residency Program at the GGS.

About the Rolston Quartet

With their debut recording, “Souvenirs” recently named BBC Music Magazine ‘recording of the year’, Canada’s Rolston String Quartet continues to receive acclamation and recognition for their musical excellence. As the 2018 recipient and first international ensemble chosen for the prestigious Cleveland Quartet Award from Chamber Music America, their accolades and awards precede them. In 2016, a monumental year, they won First Prize at the 12th Banff International String Quartet Competition, Grand Prize at the 31st Chamber Music Yellow Springs Competition, and Astral’s National Auditions.

Recent highlights include debut performances at Carnegie Hall, Wigmore Hall, The Freer Gallery, and Chamber Music Houston, two major Canadian tours under the Prairie Debut and Debut Atlantic touring networks, and three European tours with dates in Leipzig, Berlin, Lucerne, Heidelberg, Barcelona, and Graz among others. Their 2019-20 season includes concerts at UCLA’s Herb Alpert School of Music, Texas Performing Arts, Chamber Music Northwest, and Calgary Pro Musica; the chamber music societies of Detroit, Fort Worth, Kansas City, Philadelphia, and Vancouver; and the Louvre Museum. As Süddeutsche Zeitung states, “they showed such delicacy, slender elasticity, impeccable intonation, and such eminent sense of tonal balance…This is a new bright star on the truly not empty string quartet sky of our day.”